I have witnessed the strange phenomenon of Escarchas more than a few times. I never see it in a taxi, or a football stadium, or a bar. No, it always presents itself in a place, and at a time, of deeply serious worship. Afterwards, it often remains on church pews, or even on the hands or faces of prayer warriors.

The word "Escarchas" means "frost" in Spanish. When Americans see it, they often call it glitter. But, though it looks like glitter, it is very different. A translated Spanish article, found on SpiritDaily.com, describes the scientific testing that was done on a collection of Escarchas from 1993 to 1995. The original article was titled, "La Gracia de las Escarchas" and was written by former monk Allan Weilart.

Investigators from different laboratories at the Central University of Venezuela, conducted two sets of studies. They found remarkable differences in man-made glitter and the Escarchas that had appeared on different dates at the monastery of Carrizal, as well as other convents and a Marian conference.

Viewing with a microscope and then an electron microscope, the samples were compared, next, they were chemically processed and compared, finally, incinerated and compared. The chemical processing included using nitric acid, hydrochloric acid, isopropol alcohol, hydroxide of sodium, benzol, benzene, and flurohydric acid.

In the Escarchas, the scientists observed the presence of protozoans, algae, or fungi, bubbles of air, water and crystals, without activity. To them, the Escarchas seemed like fossils. On the other hand, the man-made glitter "do not contain anything organic in them."

The chemical processing revealed that the Escarchas are not metallic, nor plastic, nor mica, nor resin. In fact, their composition could not be determined. Test results with flames showed that, unlike with man-made glitter, Escarchas did not indicate serious bleaching, but actually increased their shine. Also, extreme heat applied to the Escarchas did not produce any irritating odor, noxious to the eyes and throat, like the glitter produced.

On September 23, 1999, a priest who wishes to remain anonymous claimed that the Most Holy Virgin Mary explained to him the meaning of each color of Escarchas. Here is what he reported that she said: 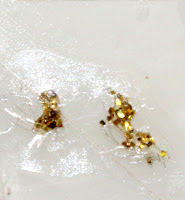 It is interesting to watch someone preserve Escarchas with clear tape, because when it is lifted from a pew, it often seems to almost well up, filling in with more where some were removed. I have watched it appear on my hands, before my eyes, for example, as Ruth Werkowski prayed over me. My mother, who attends Mass almost every day, was blessed with Escarchas in her pew.

This miraculous manifestation of God's love is not, of course, a foundation of my beliefs. I see it, instead, as a lovely sign of God's encouragement.