Recently, I flew to New York for the purpose of investigating and experiencing a surprising phenomenon. For a few years, some of my most devout Christian friends have shown me various rose petals that display marvelous Christian images. By now, I have probably seen close to a hundred of them and each one is detailed and almost always unique. 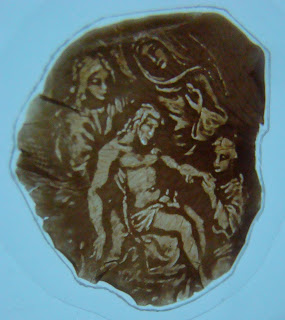 Carmelo Cortez, an inconspicuous Filipino, is the man who is responsible for these images. However, he insists they are from or Lord Jesus Christ, through the intercession of His Blessed Mother. He claims he first started seeing apparitions of the Virgin Mary in 1991. At one point, Blessed Mother told him to go in front of the church and dig. Instead of finding a spring of water, holy oil began to flow out of the ground. I have a small vial of this beautifully fragrant liquid.
The night I met Carmelo, at a Catholic Church on Staten Island, we started the evening with a rosary. But because a wedding was being rehearsed in the main church, only some of us could participate in the small room in which the rosary was being said. But there, in the room, I saw dozens of beautiful white roses that we had all brought to the service, as instructed.
Soon, three priests conducted a mass, with at least one deacon assisting, while Carmelo sat quietly to the side. When the mass ended, Carmelo came before the altar and asked the priests to assist him. First he asked them to unscrew a few containers of bottled water and take a sip of each. I assume he wanted to show that the bottles were not previously opened and that they were just water. Then he poured the water in a vase and a bowl and asked a particularly holy priest - Fr. Johannes Tan -  to put his rosary in the water. Immediately, the water turned into fragrant oil. They brought it through the congregation for each of us to dip our rosaries into it and to feel and smell the holy oil. 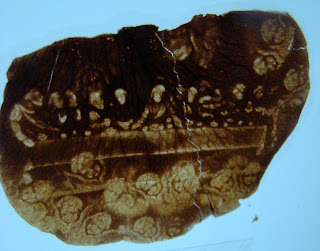 Then Carmelo nonchalantly tore the rose petals from the flowers we had brought and dropped them into one of the big bowls that now contained the holy oil. We were all instructed to stand before the altar in a line as Carmelo pulled one rose petal at a time out of the bowl, slipped it into the necks of our shirts, and touched our foreheads as he said a quiet prayer while we held the rose petal close to our hearts.
By the time we had returned to our seats, we each pulled out our rose petals to witness our blessings. One man, who never misses these types of events (and always wears a large pin of Our Lady of Guadalupe), had that same image on his petal. Surprisingly, he had also received that image the last time he was with Carmelo.
I have seen so many other Christian images that there are too many to list here. For examples, the Holy Family, the Crucifixion, the Prodigal Son, many of the apostles, many saints, St. Michael the Archangel surrounded by numerous angels, even the Last Supper… on a rose petal! 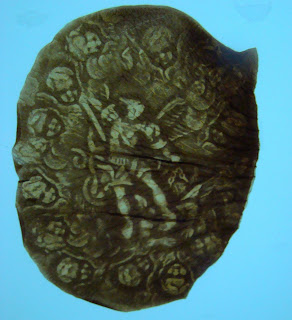 We were repeatedly asked to receive only one petal – which disappointed many of us – but most of us complied. One lady, who sat near me, went up for a second one. It came back blank.
Immediately after the service, I spoke with a great Christian friend, Elsye, and the nun she was standing near. The sister was crying, but they were tears of joy. Elsye told me the story of how the nun pulled out her rose petal and it had turned into a perfectly round Consecrated Host. It looked like a wafer of wheat bread but it had the Sacred Heart of Jesus imprinted on the center of it. With big eyes the sister asked Elsye, “What do I do with it?” Elsye responded, “You have to eat it!”
Elsye later regretted that she did not get a picture of it but the moment was so moving that the thought did not cross her mind, at the time. But Elsye did get a look at the bowl of rose petals and saw a half dozen, or so, more Hosts scattered around the perimeter of the bowl.
I suspect that physical healings probably occurred that night. I did not have time to investigate. Regarding enormous spiritual blessings, however, I am certain.

That evening, I watched with an open mind, a prayerful heart, and a skeptical eye. For those who approached it that way, I think they each left with one response: Praise God!