I just returned from a visit to Sunrise, Florida where my wife and I witnessed some apparently miraculous manifestations. At St. Bernard's Catholic Church, a statue of the Blessed Mother, called Rosa Mystica, is exuding fragrant oil. 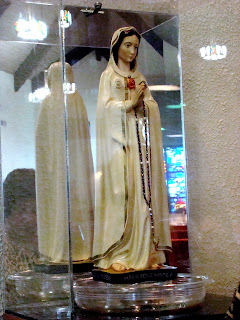 The statue is based on witness descriptions of The Virgin Mary in apparitions that started in 1947 and later picked up again, two decades later. The apparitions were in Italy, first at Montichiari and later at Fontonelle. The beautiful woman in the apparitions said she is "the Mother of Jesus and the mother of all of you."

On her chest, were three roses; white, red and yellow. She said that the white rose represents prayer, the red sacrifice, and the yellow penance or conversion. Today, a surprising number of Rosa Mystica statues and pictures are exhibiting miraculous phenomena. Some exude oil, others weep blood. (Images and videos from around the world can easily be found on the Internet.) But the one in Sunrise Florida has another unusual twist. It exudes pearls. When we were there, seven pearls rested in the bowl of oil at her feet. It seems God never tires of surprising us.

We spent a couple hours in prayer, veneration and meditation before the healing service would begin that evening. During that time, we spoke with some lovely Christian ladies who had brought scotch tape. With it, we clumsily lifted a variety of colorful escarchas (a mysterious Gift of holy glitter) off our pews. It seemed, the more we lifted it, the more escarchas appeared. I will write more about this phenomenon in a future post. 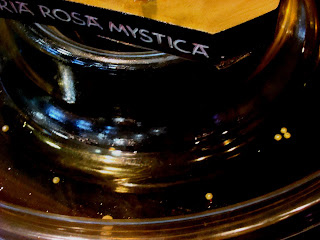 The service that night was in many languages, reflecting the predominantly lower-income, immigrant composition of this parish. It seems that the vast majority of miraculous phenomena around the world occur in such simple, impoverished environments.

This service, however, was not the first time I was reminded of the universality of the Catholic Church, both internationally and inter-racially. But it re-emphasized for me one of the principles that has guided the Church for two thousand years: Every single one of us - from conception to natural death, male or female, white or black, rich or poor - is God's child. Wouldn't it be wonderful if we all accepted our blessed inheritance?


UPDATE: The seemingly miraculous phenomena described here recently occurred in Sunrise Florida. It is important to note, however, that the original "Rosa Mystica" apparition claims occurred in Montichiari Italy in 1945. Since then, the Archbishop of Brescia, Italy has declared that the original Montichiari occurrences "are founded on an interpretation of events which has not been objectively checked nor responsibly evaluated, therefore they are not approved." His strong denunciation of the Montichiari events can be found HERE.

UPDATE 3/12/12: Recent visitors to this church report that Father Vega continues to offer a Spiritually enriching prayer/healing service, there. However, at the request of Church authorities (reportedly), the oil has been removed from the bowl below the statue and small vials of the oil are no longer given out. Seven pearls, however, remain in the bowl. An observer reported that after deep prayer she saw a slight dampening around the feet of the statue but that it does not appear to be exuding oil like before. Perhaps, Church officials are reluctant to promote the veneration of the Rosa Mystica in America after the bishop's denunciation of the original phenomenon in Montichiari, Italy.