This is one of those blog posts from which some readers may conclude I am either lying or nuts. So, for the benefit of doubters, I will try to focus on facts and evidence. But before getting to the (seemingly?) miraculous part, I need to provide some background.

Last November, as I rearranged various items around the house while preparing for the upcoming Christmas season, I wanted to clear a table-top area to make room for our Nativity scene. So, I moved a statue of Blessed Mother (right) to a less conspicuous location in the master bedroom. But after squeezing it into one of our display cases, I found the spot too cramped. Consequently, I removed a San Damiano Cross (below) in order to make room for the Virgin Mary statue. Then I stored the Cross in a cabinet, out of view.

[Readers might remember that the unusual San Damiano Cross was the one St. Francis was praying before when God instructed him to go out and rebuild His Church.]

The next morning, however, Betsy (my wife) did not like that I had removed the figurine of the Virgin Mary. She had developed a fondness for the statue in that location because it had been visible from where she would always say her morning prayers. When Betsy stepped over to where the object had once been placed, however, she believes she received an unmistakable message.

Standing exactly where the statue had stood, she sensed a very meaningful aroma. It was a smell that she and I have both experienced before, but only in very prayerful situations. Some call this the "odor of sanctity" - a strong, pleasant aroma, much like the scent of roses. (Briefly described here.) Sometimes it accompanies oils, for example, that exude from holy statues. Yet, at other times, the fragrance seems to manifest itself in the air without any material accompaniment.

Now, I don't want to give the impression that we insist on coordinating our lives around signs and superstitions, but Betsy was adamant that Blessed Mother wanted her statue returned to its original setting. So, both the figurine and the Cross were placed in their earlier display locations.

Then, either that afternoon or the next day - I can't remember which - I received a wonderful gift in the mail. It was from an extremely generous Catholic friend who had attended a recent prayer gathering in New York; one which I had hoped to attend, but couldn't. In addition to Holy Mass and the Rosary, the prayer meeting had included an exposition of the Spiritual Gifts of Carmelo Cortez. (For more background on this amazing Catholic mystic, read here, here, here, and here.)

My friend had warned me to watch out for the mailer, saying it would include an extraordinary rose petal from Carmelo. But she had refused to describe it. So, when I received the envelope, I sat down on a leather chair in front of my bedroom display case and opened it with strong interest.

At first, as I studied the gift (right), I was not quite sure what to make of it. The white rose petal had been mailed inside a plastic sleeve, much like the ones that are used to preserve baseball cards. This image was not obvious to me at first. But as I flipped and turned it, I soon realized that it portrayed Christ on the Cross. Yet, even though I hoped not to seem ungrateful, the likeness did not appear as realistic as every other one of Carmelo's rose petal images I had seen.

I wondered, "Why are the arms rounded so unnaturally?" and "Why is the Cross ornamented and oddly shaped?"

Then I raised my eyes and realized I was sitting directly in front of our replica of the San Damiano Cross; the one we had just returned to our display case.

As I began to compare the images, I was amazed at the similarities. (See pictures below. The first image on the right has been tweaked for higher contrast to make the details more obvious.) 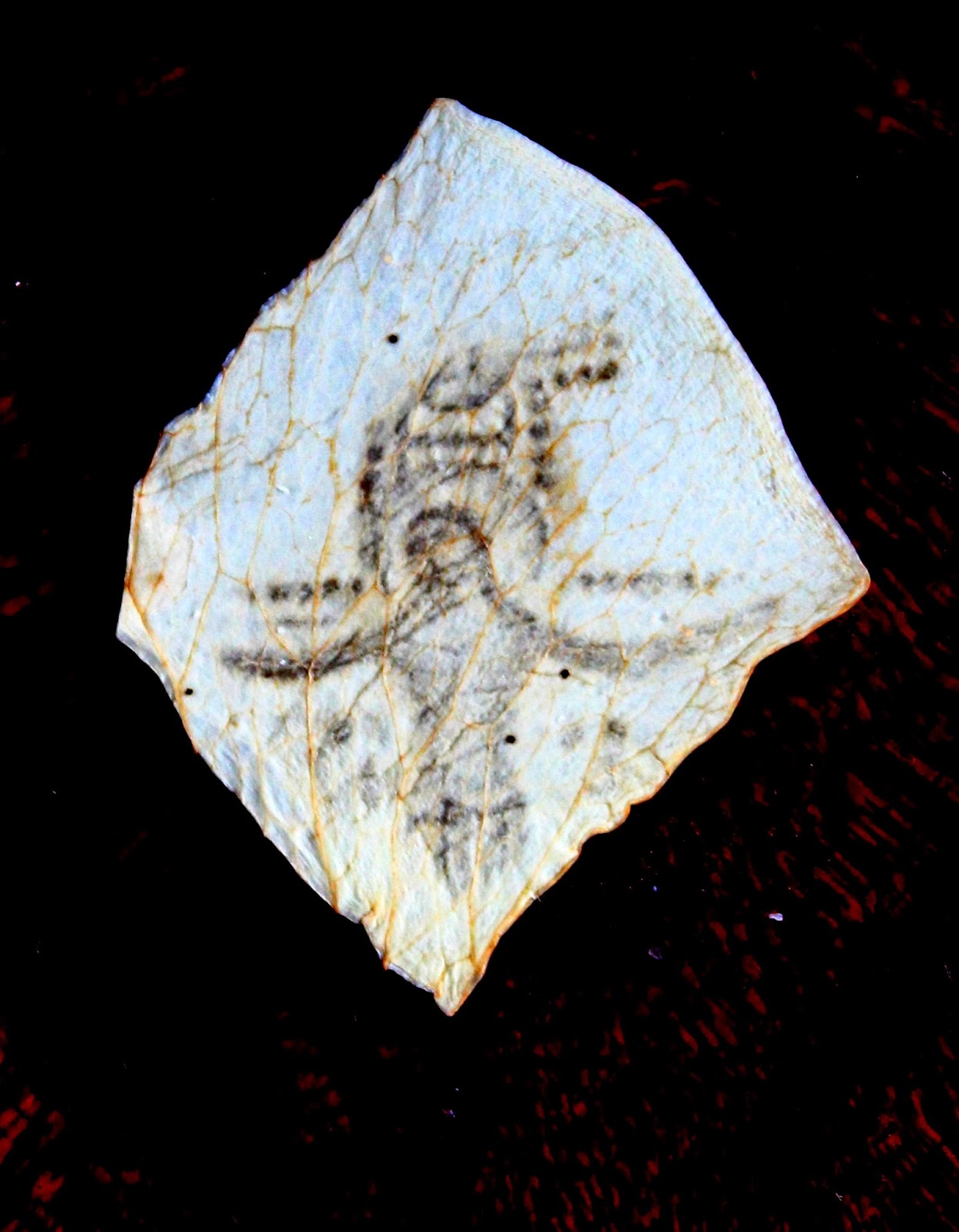 After finding a magnifying glass, I began to study the two images. Soon, I discovered the following precise similarities: 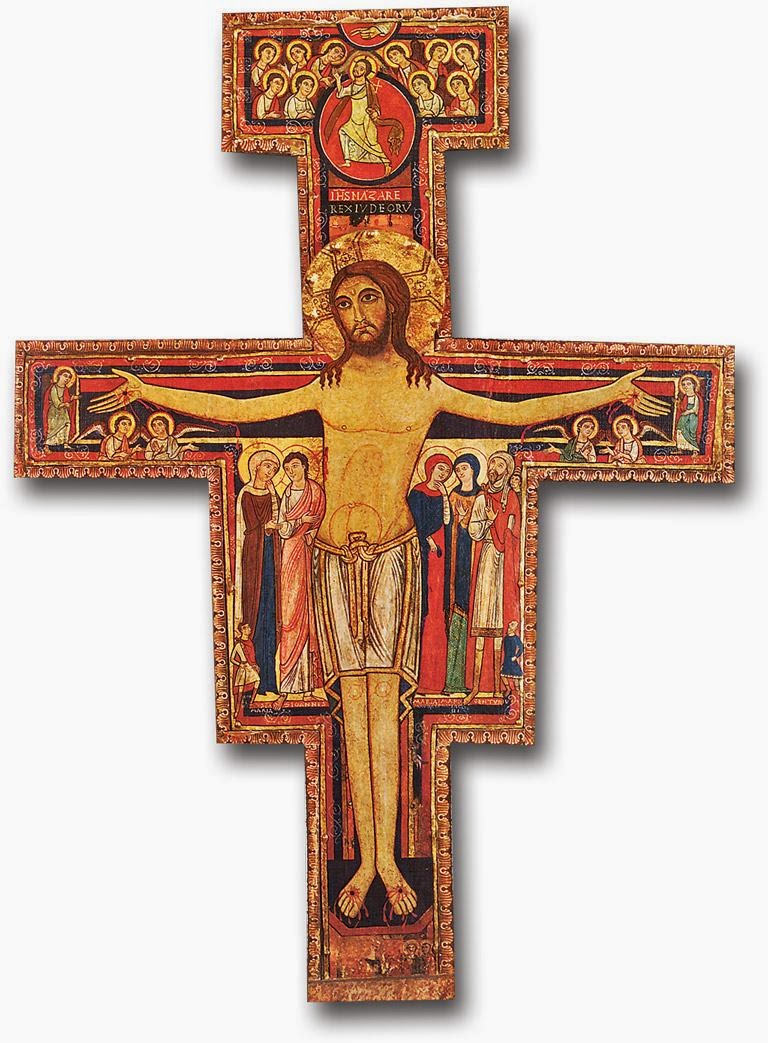 Indeed, the elbows are unnaturally bowed. But these iconic arms represent one of the unique aspects of the San Damiano Cross. On it, Jesus is portrayed, not as the agonizing Christ but, instead, with arms outstretched, as if preaching the Gospel from the Cross.

So, at this point, I was pondering the three apparent miracles this wonderful gift had brought us:


However, God was not through. He had more miracles to share. 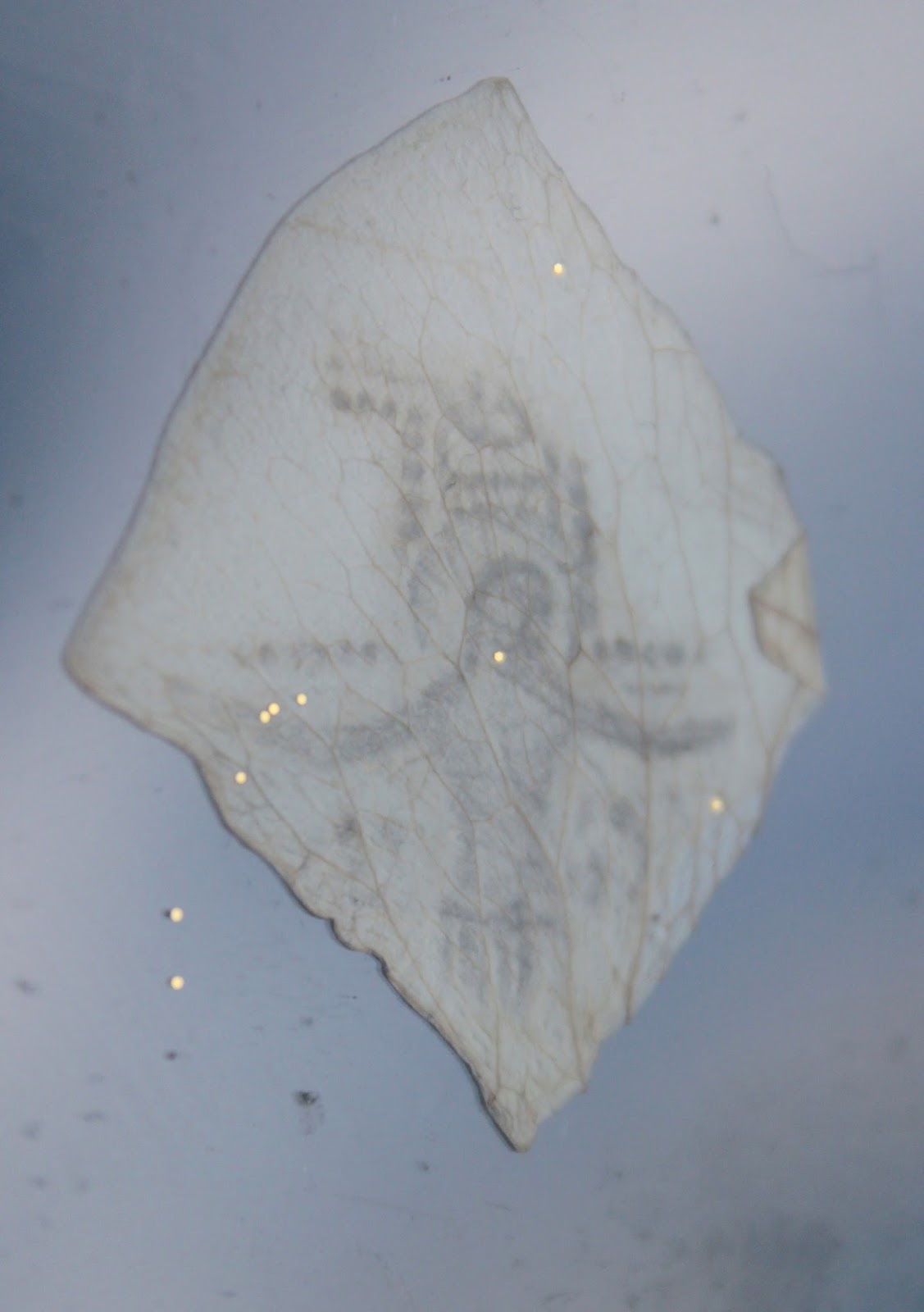 As I continued to study the rose petal under differing light conditions, I found another surprise: escarchas. (For more on escarchas, read here.) Sometimes called God's Glitter, this surprising phenomenon is believed to be another miraculous manifestation from God.

On the rose petal (left), I found golden glitter on the front and back. In all, I found thirteen specks, seemingly representing Christ and His apostles. One gold dot was directly over the beard or neck of Jesus Christ, and one was so far removed from the others that I could not fit it into my pictures. (Judas?)

So, chalk up miracle number four.

But God had another surprise for us; one that would help dispel the suspicion of some skeptics, that these images are somehow stamped or drawn onto the petals. 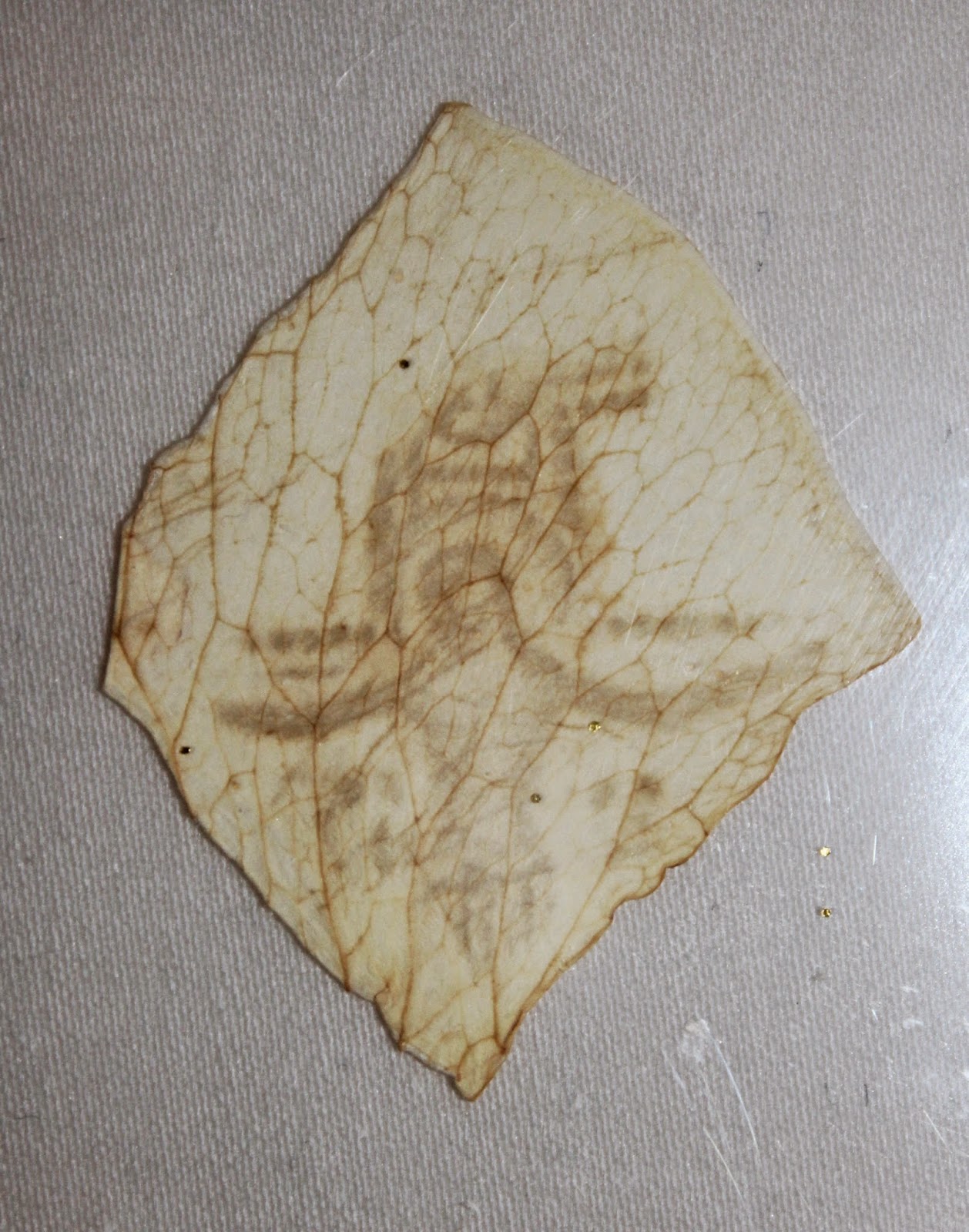 During my continuing examinations, I kept noticing how the image appeared to change colors whenever its surroundings were altered. So, I tried another experiment.

I held the petal up, in front of a window. Then I discovered that the bright light actually penetrated through the image.

That surprised me because, until then, I had assumed the images, even if miraculous, had been imprinted, so to speak, on the petals. In other words, like with printed words on a page, I expected that the light would shine through the white paper and be blocked by the printed letters. However, my experiment demonstrated the opposite. The sunlight penetrated through the image more than the rest of the rose petal. Wherever the image was, the rose petal became transparent or, at least, more translucent.

To demonstrate this, I took a picture of the image in front of a bright window. (See below.) I also added contrast to the image, just to make the details more clear. Keep in mind that even though this looks like a negative, it is not.

It can truly be said that this image represents the Light of the World. 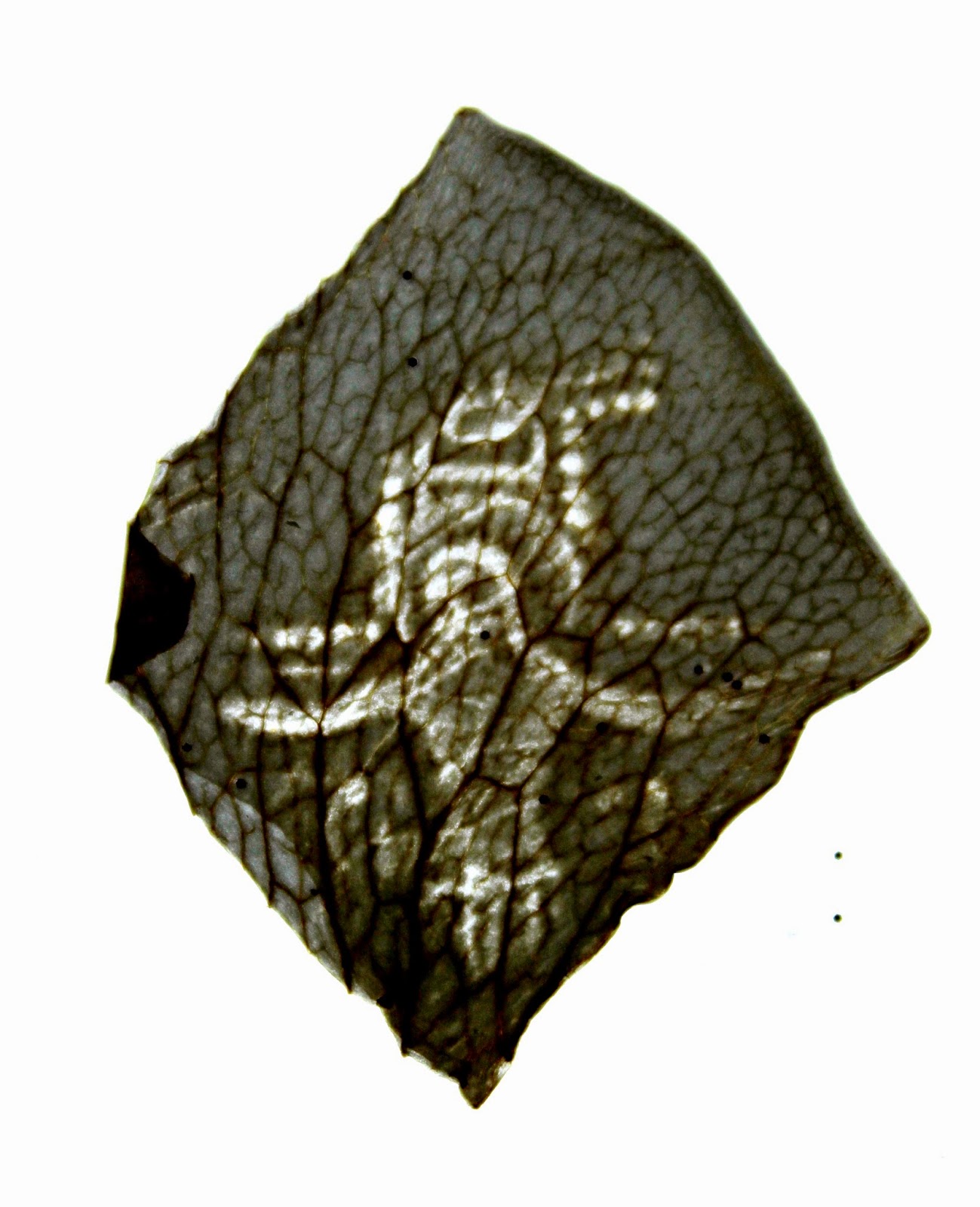 So, I am left with questions, and that is why I have taken so many months to write this entry in my blog. I have wondered:


Yet, another lingering question involves a completely different issue. Reportedly, over a six year period the Blessed Virgin appeared to Carmelo Cortez 101 times and, at every meeting, asked him to "pray for priests." Whether coincidentally or not, this is a calling I have been receiving in a big way, involving considerably more than just praying. (The subject of another blog post, some day?) But, regardless, priests today are on the front lines of raging Spiritual Warfare, maybe like never before. They deserve and need our prayers.

So, in closing, I simply ask that you kindly accept three things: