As I write these words, today  is the 30th anniversary of the first Marian apparition in Medjugorje. The beginning of those world-famous visions  is celebrated on the 25th of June, however, because that day marks the first time the visionaries spoke with the Blessed Mother.
Recently, I returned from my pilgrimage to that small, mountainous town in Bosnia Herzegovina, forever changed. Medjugorje is a memorable place, and my trip was filled with unforgettable experiences. 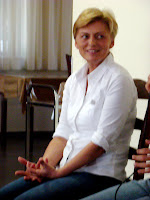 It was one of the great pleasures of my life to meet, talk and even joke with visionary Mirjana Soldo. She is 46, soft-spoken and thin from fasting. She radiates a seriousness and, perhaps, even sadness as she recounts the history of the apparitions and the messages that Blessed Mother has revealed to her through the decades. However, she quickly offers a loving smile and a quick wit whenever the opportunity presents itself. In fact, I found myself on the receiving end of her wit.

Whenever I travel outside America, I like to study each country’s history, culture and language in order to better immerse myself in the experience. For this country, I had read that the appropriate introductory greeting in Croatian would be, “I am pleased.” So, when Mirjana called on me to ask a question, I gave it a shot, saying in Croatian, “Mirjana, I am pleased.” 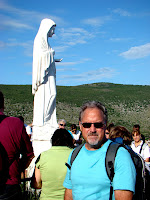 Immediately, however, I realized something was wrong. She and her translator looked at me, blankly. Then they looked at each other. Then at me, again. “Dobro mi je?” the translator asked. I nodded. He grumbled, “You just said, ‘I am good!’”
The room erupted with laughter and I turned beet red with embarrassment. I had come all this way to proclaim to, perhaps, the world’s most famous visionary that “I am good!”
But I quickly recovered and moved on to my question: “Mirjana, I realize the importance of focusing on God’s Blessings and Graces, rather than on the prophesied Chastisements. But isn’t it correct that the 10 Secrets that have been revealed to you by Blessed Mother must transpire within your lifetime?” In essence, I was trying to pin her down on a timeline, confirming that the Secrets’ unprecedented events are approaching in the not-too-distant future. 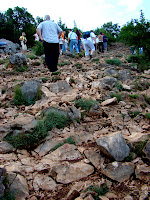 With that, she launched into a lengthy, serious answer regarding the miraculous parchment on which the Secrets are written. It seemed to me that she was dancing around a direct answer to my question, which was not surprising. I had suspected that she would be reluctant to shed much light on the timeframe within which the Secrets are to occur. The visionaries – and Our Lady –  have always emphasized hope over fear. “With prayer you can change even the laws of nature,” Blessed Mother has assured us. In fact, the visionaries have confirmed that one of the predicted Chastisements already has been lessened specifically because of the prayerful response of believers.
At the end of her lengthy answer, however, she briefly returned to my question and the translator interpreted by saying something like, “But as to whether the Secrets must occur during my lifetime, no.” Then she tapped him on the knee and corrected him in Croatian. He revised the translation with, “Rather, I cannot say. After all, Secrets are Secrets.” That interchange confirmed for me what she was very guarded about revealing: The 10 Secrets must occur during Mirjana’s lifetime. 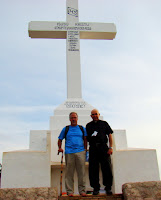 In fact, I suspect that the Secrets must also transpire during the lifetimes of all six visionaries, as well as before the death of Fr. Petar, the Franciscan who will announce the parchment Secrets 3 days before they unfold.
Mirjana, now smiling at me, returned to my mistake. She offered that if we will just follow Blessed Mother’s advice, “Some day we can all be good … just like you.” Embarrassed, I sheepishly put my head under the table as everyone had a good laugh at my expense. The translator went on to the next question but she again tapped his knee and said something about me in Croatian. He translated, “She says you are … interesting … cute … there’s a word in our language.”
It warmed my heart to know that I had amused Mirjana. Better yet, perhaps my bumbling had even elicited a smile from her best friend, Blessed Mother.
For the rest of the week, we exchanged smiles and brief conversations. Our group was staying on Mirjana’s property and she and her beautiful daughter, Marija, waited our tables in a Spirit of humble, Christian service. It was a real shocker to me, and I never became comfortable with the thought that they were serving me. Her husband, Marko, also busied himself throughout our stay, making sure that the accommodations were all properly in order.
During our 10 day pilgrimage, I happily attended – sometimes - two masses a day, prayed rosaries in numerous languages, experienced the most moving Eucharistic Adoration I have ever seen, benefitted from a moving confession that brought me to joyful tears, and on and on. No one can truthfully say that the Spiritual Fruits of Medjugorje are lacking. If every diocese would experience such an outpouring of Faith, Hope and Love, we would have Heaven on Earth, today. 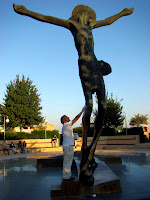 I climbed Apparition Hill, upon which (30 years ago, today) the Virgin Mary first appeared with baby Jesus in her arms, and above which the permanent, visable sign from God will appear when the Secrets are revealed. Along the way up the Hill, large bronze moldings prompt contemplation of each mystery of the rosary and a decade of prayers.
I climbed Cross Mountain, barefoot. Some pilgrims commit to this minor sacrifice in order to attempt  to bring themselves into greater union with Jesus Christ’s suffering as they ascend the hill, stopping at each Station of the Cross that, again, are all marked by large bronze moldings.
I also prayed at the knee of The Risen Christ. That large bronze statue has been exuding a fluid from the knee, miraculously, for about a decade. 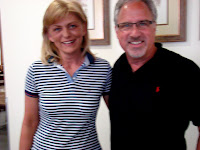 There are so many more experiences to write about but, for this post, I just want to add that I thank Michael Brown (founder of SpiritDaily.com) for taking a lead on this pilgrimage, and Jim Benzow of Trinity Pilgrimages in Scottsdale Arizona who could not have done a better job leading our group. Also, Miki Musa, is a fabulous guide and translator in Medjugorje with  an amazing depth of knowledge, experience and sensitivity. Finally, I will be forever grateful for the opportunity to meet Our Lady's friend, Mirjana, and her beautiful family.
[MARK YOUR CALENDAR: An ABC News Nightline crew travelled with us and will be airing an ambitious 1 hour special on Medjugorje on July 6th at 10 PM EST. This is a beautiful opportunity for anyone to learn more about the messages of Medjugorje. Let’s all pray they get it right.] 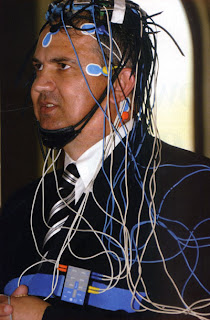 SEPTEMBER 12, 2011 UPDATE: An informative update regarding the Vatican's investigation into Medjugorje's apparitions may be found HERE.

This picture of visionary Ivan Dragicevic demonstrates the inconvenience and daily disruptions that have burdened the six visionaries as a result of unrelenting investigations over the past three decades. If any proof of deception had been found, a conclusion could have been reached immediately.