xx Is Elenin Associated with the Three Days of Darkness Prophecy???

[Note: This event has passed without incident. However, similar cosmic phenomena may pose similar threats to mankind in the future.]

One thing is clear, except for Noah, predictors of imminent global doom have a perfect record, unblemished by success. Still, many prophecies of saints and Scripture have been surprisingly accurate, through the centuries. 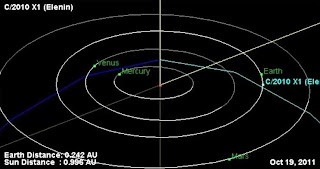 So,  with some hesitation and at the risk of sounding like the crazy old coot on the corner shouting, "The end is near!" I want to describe a little-known, but certain, event that will happen soon and that possibly could have cataclysmic consequences. In fact, the phenomenon is being studied from every scientific angle, yet rings eerily consistent with prophecies regarding the Three Days of Darkness.

In late September of 2011, an astronomical object named Elenin will pass precisely between Earth and the Sun. (See 3D orbit visualization tool. Zoom in a little and advance the date to September 26.) That is not debatable. The rest of this information is most certainly debatable. Scientific skepticism and Spiritual discernment would be wise because there is a great deal of controversy, both in scientific and Catholic communities, on this topic. Since this summary is extremely abbreviated, further study is recommended. But be forewarned, there is also a lot of hyped up sensationalism to be found regarding Elenin on the Internet.

Here is a very brief summary of some of the prophecies, the scientific data and theories regarding Elenin, and the possible consequences of its passing.

First, regarding the prophecies, just as Moses brought God's Justice to Egypt with three days of darkness (Exodus 10:21-23), that same chastisement is prophesied for a future time. Jesus predicted that "the sun will be darkened, the moon will lose its brightness, the stars will fall from the sky, and the powers of Heaven will be shaken." (Matthew 24:29) In Revelation 16:10-11, we read the prophecy that "the beast and its whole empire was plunged into darkness." (This short video applies the prophecies of the Book of Revelation to the circumstances regarding the passing of Elenin.) Adding much greater detail to the Scriptural accounts, other prophecies have come from Brother David Lopez, stigmatist Sister Elena Aiello, Mother Elena Leonardi, Blessed Gaspar del Bufalo, Sister Mary of Jesus Crucified, Blessed Anna Maria Taigi, Marie de la Fraudais, and more recently, Christina Gallagher, to name a few. A summary of these prophecies can be found in Ted and Maureen Flynn's "The Thunder of Justice."

The unprecedented tragedy predicted by these prophecies could be fulfilled as follows.

On its well-defined course, Elenin and its tail have been predicted to bring up to up to 70 hours of darkness to Earth. Also, scientists have speculated that this comet is not just a harmless ball of ice that would have no gravitational force affecting our planet. Rather, they believe that the approaching mass is actually a dwarf dark star. These celestial bodies are hard to identify, by telescope, and that is why the first one was not discovered until the 1990s, as I understand it. However, a dwarf star would exert enough gravitational pull on our planet that extreme earthquakes and tsunamis would fulfill many of the Three Days of Darkness prophecies. Even more cataclysmic, though less likely, is the possibility of a polar shift.

Here are two details that should tweak our interest. On February 27, 2010, Chile's 8.8 earthquake was so powerful that it threw the Earth off its axis by 3 inches. Then off the coast of Japan, on March 11, 2011, a 9.0 quake shifted the planet's axis by another 4 inches. On both of those dates, Elenin, the Sun and our planet were in distant alignment.

On another point, Elenin's tail is estimated to be 900,000 km long - about 560,000 miles. This time, when it aligns much more closely, that tail will fan away from the Sun, toward Earth. Further, a group of scientists have detected that Elenin's tail contains hydrogen cyanide, a toxic gas. So, many more of the Days of Darkness prophecies would be fulfilled if that deadly gaseous tail fans through our atmosphere, as some have predicted.

The prophecies describe more than darkness. "During these Three Days of Darkness, there is not going to be one demon left in hell.... [D]emons will try to lure you out of the house.... [P]eople will be so afraid that they will kill one another.... [T]he cold will be intense...." (Lopez) "It will last seventy hours." (Aiello) "[A] great part of humanity will be destroyed ... a time of despair for the impious." (Leonardi) "[T]he whole world will be covered with carcasses." (del Bufalo) "[O]nly one fourth of mankind will survive." (Sister Mary) "[T]he air will be laden with pestilence.... It will be impossible to use any man-made lighting except blessed candles. He who out of curiosity, opens his window to look out, or leaves his home, will fall dead on the spot. During these three days, people should remain in their homes, pray the rosary and beg God for mercy..." (Taigi) "Only blessed candles made of [bee's]wax will give some light during this horrible darkness. One candle will last for three days.... Lightning will penetrate your houses, but it will not put out the blessed candles.... [T]he crash of thunder will shake the Earth to its very core." (de la Fraudais)

As horrendous as that sounds, if we spend our time wisely now - if we humbly submit to God - we have nothing to fear. Our Lord reportedly told a Croatian visionary named Julka that, "Some people will fall into a deep sleep granted by Me, so as not to see what is happening on Earth." Brother David Lopez said Blessed Mother advised, "Do not be afraid about the Three Days of Darkness that will come over the Earth, because those who are living my messages and have a life of interior prayer will be alerted by an interior voice three days to one week before the occurrence.... Do not be afraid of anything or anybody. Be filled with God's love by praying, reading Holy Scripture, and receiving the sacraments. I will be with you during the time of anguish, and my children may call on me for secure refuge."

Do I believe that this tragic scenario is imminent? No. But just like with insurance, when we prepare for unlikely but devastating events, I believe it is wise to prepare. We do not know the day nor the hour of Christ's Second Coming, but we should be alert to the signs of the times.

Is Elenin an icy comet or a dwarf star? We will know in late September. Until then, we would be well advised to pray, to take advantage of the Sacraments, and to draw closer to God ... regardless of what will happen. The choice is ours.