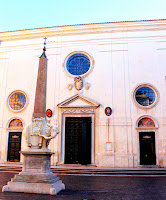 
In the shadow of the Pantheon, Basilica Santa Maria Sopra Minerva (left) was built over the ruins of Pompey the Great’s Temple of Minerva (50 BC). This site's first church was ordered by Pope Zacharias (741-752). In the 13th century, however, the monastery next door and that early church were given to an order of Domincan Friars. By 1370 they rebuilt the structure, making it the first Gothic church in Rome. Dominicans continue to serve the church, to this day, where Bernini’s charming little Elefantino welcomes visitors, outside.

Near the main altar is Christ the Redeemer (right) that was begun by Michelangelo, but finished by one of his students. Its bronze loin cloth is a later addition. 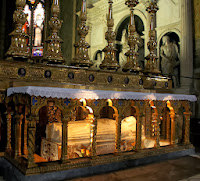 Medieval master artist Fra Angelico and two 16th century Medici popes are entombed here: Pope Leo X and Clement VII, one of the most unfortunate of all pontiffs, reigning during the infamous sack of 1527. Most notably, however, this church holds the sarcophagus (left) and relics of Dominican mystic St. Catherine of Siena who lived here. Her room has been preserved for viewing (right of the altar).


On a personal note, this is a very special basilica; one we will forever remember because of an incident we witnessed here. 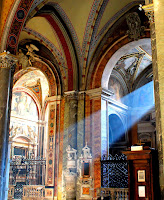 On the last day of what we thought (incorrectly) would be our final visit to Rome before completing our book, Rome and the Vatican - Guide 4 Pilgrims,  we chose this basilica as our last picture-taking and research site. Just before noon, I was snapping final shots in the church as bright sunbeams pierced through the church’s windows (right). I had previously photographed Corrado Mezzana’s Sacred Heart with Sts. Catherine of Siena and Margaret Mary Alacoque (below). 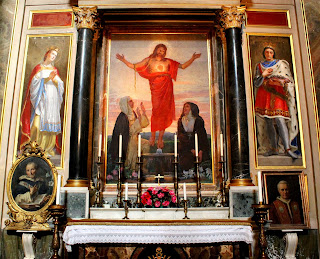 As I began to leave, however, I stopped in my tracks, stunned by the way the sunlight illuminated the painting of the Sacred Heart of Jesus.


Just then, the noon bells began ringing and my wife approached to show me her last-minute purchases from outside. I shushed her and pointed at the shining portrait. As the church bells finished tolling, we stood there in amazed silence, staring at the image of a glowing Sacred Heart (below).

Coincidence? Maybe ... but we don’t think so. 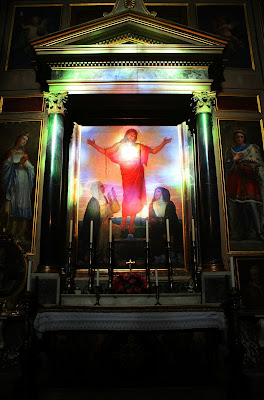