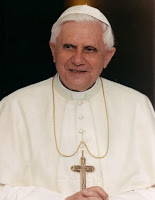 Pope Benedict XVI has announced he will step down, effective February 28. The declaration came as a surprise for Vatican watchers around the globe because a papal resignation has not occurred since 1415.

So, now, the prophecies attributed to St. Malachy appear more ominous and pressing than ever before.

Though the exact origin of these 112 Latin phrases is clouded in controversy, there can be no doubt that they have provided some remarkably accurate descriptions of each succeeding pontiff for at least four centuries, since the time they were made public. However, many believe these short labels actually have predicted every pope since the twelfth century.

For a few examples, here are the translated descriptions of recent pontiffs:


Finally, we reach St. Malachy's last description, the one that casts an ominous shadow over the future of Christ's Church on earth and, indeed, the world:


"In the final persecution of the Holy Roman Church,
there will reign Peter the Roman,
who will feed his flock among many tribulations;
after which the seven-hilled city will be destroyed
and the dreadful Judge will judge the people.
The end." 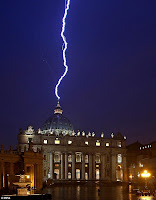 With this prophecy in mind, the drama of Pope Benedict's stunning resignation appeared suited for a movie script. However, no special effects were necessary, on the day of his announcement, for lightning to strike St. Peter's Basilica not once, but twice.

However, we should never lose sight of the fact that, with all this sensationalism, it is possible that the Evil One has planted false prophecies, accompanied by signs, to sow fear and dissension in Church ranks at this crucial time.

So, we would be wise to pray for wisdom.