God saved a boy's life today. Did his mother care? 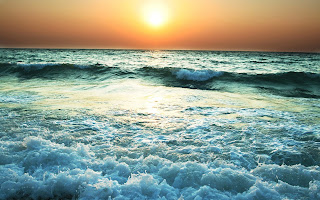 "In the last days ... through the abounding of iniquity
the love of many shall wax cold."
Didache
ca. 100 AD
Lately I have not had time to post on this site because of the recent release of my second novel. However, today I am posting a second time because of a story that still mystifies me.

This morning, my wife and I went to the beach for a little reading and tanning. The visit was unusual for us because we normally take a brief beach trip on Saturday mornings instead of Friday. Also, we left earlier than usual because we planned to attend Good Friday's Stations of the Cross at noon.

On the way, Betsy and I said our daily rosary and I now believe it was a good thing that we were fortified with prayers.


When we arrived, few others had made it to the beach, yet. So, we peacefully read for a while. I commented to Betsy that the waves were hitting the shore unusually hard and I knew that this was not a day, even for grownups, to be challenging the roiling surf.

Eventually others arrived, including a couple of young women with four small children. They set up their beach gear about a hundred feet from us and also from the water. The youngest child was a cute, blond boy that his mother called Bobby. He wore a little baseball cap and couldn't have been more than two years old.

Soon, Bobby was down by the water, with the other kids (the oldest, no more than eight), while his mother gabbed with her friend and ignored him. I was very uneasy about the dangerous situation but resisted butting in on their family's business. But after squirming in my chair for a while, I could resist no longer.

I walked over to the mother and said, "Ma'am, I'm sorry to bother you, but we have strong riptides today that can sweep a child out to sea real quickly. You might want to..."

Just then a wave knocked Bobby over. I straightened up but didn't want to be overly dramatic because the receding wave had left him on dry sand. Then, quickly, a bigger wave hit him, pulling the boy into the surf. Immediately, I sprinted his way. When I got to him and lifted him up, he coughed out some water. Then an even bigger wave hit us and knocked him out of my hands. I lost him in the surf.

I'm sure it was for a very brief time but it seemed like an eternity as I desperately attempted to locate him in the opaque surf. During that time, I wondered if he had been sucked into deeper water by the undertow.

But, eventually, he surfaced and I snatched him up as he coughed out water and sand. Cradling and comforting him in my arms, I turned to see if I could retrieve his hat that had been knocked off his head. I watched as it bobbed once, got sucked down, and disappeared.

I knew that Bobby could have had the same fate.

My adrenaline was rushing and my heart pounding as his mother finally arrived, calm as a cucumber. "I'll take him now," she said without a hint of concern or thanks.

I handed the boy over and returned to my beach chair to inspect my soaked smart phone and examine the soggy contents of my wallet. We had wanted to stay longer but I couldn't get the sand out of my wet shoes and I wanted to rinse the moist sand off my clothing and out of my pockets.

So, we packed up and left as Bobby returned to the water's edge and the young mothers continued their amusing conversation, 100 feet away from him.

I still find the event disturbing. That young woman did not appear stupid. She was not simply ignorant of the danger.

I am not judging her -- that is God's job. But, frankly, she impressed me as the kind of person who would be more interested in watching a new episode of "Jersey Shore" than watching her beautiful boy when he is in danger. Is this what we are coming to? Are we becoming too distracted by superficialities to pay attention to what is real and important?

Regardless of whether this woman is indicative of modern motherhood or not, this is a special Good Friday for me ... and for Bobby. So, I will try to keep him in my prayers so that he -- and others like him -- will be protected.

It was very unusual that we were there, on a Friday. Also, my accidental timing of walking over to her at precisely the moment when Bobby was knocked down by a wave made it possible for me to reach him sooner. I may not have caught him, in time, if I had been in my beach chair, farther away.

Still, Betsy and I believe that I did not save Bobby. God did.