The spirit of our times...

"They will ridicule Christian simplicity;
they will call it folly and nonsense,
but they will have the highest regard for advanced knowledge,
and for the skill by which the axioms of the law,
the precepts of morality, the Holy Canons and religious dogmas
are clouded by senseless questions and elaborate arguments.
As a result, no principle at all,
however holy, authentic, ancient, and certain it may be,
will remain free of censure, criticism, false interpretations,
modification, and delimitation by man."
Venerable Bartholomew Holzhauser
17th Century
In other reports, I have commented (HERE and HERE) on the violent persecution of Christians around the globe. Closer to home, however, we also see disturbing trends.

Unlike at any time in our nation's history, a radical minority is determined to drive Christianity into the shadows.  We witness that obsession with every new attack on Christian symbols and messages during each Christmas season. 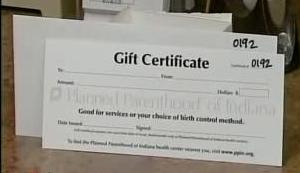 The Christmas examples are too numerous to list here, but they usually identify nothing more than petty paranoia or cynical attempts to gain media attention. One particularly sleazy campaign was offered by Planned Parenthood of Indiana. For the Christmas season they promoted Gift Certificates (HERE). Get it? The Christmas gift of abortion. That's a real knee-slapper.


One might think that our public schools would not be seeking this kind of media sensationalism. Still, every year, schools make headlines. Recently, for example, a California school required that "holiday" decorations in and around the school must have "no association to any religious affiliation." The ban stifled more that just Nativity scenes and references to Jesus Christ. Now, even Santas, poinsettias and Christmas trees are forbidden. Still on the safe list, thank goodness (if that expression is still acceptable), are snowflakes and snowmen.

However, the sinister undercurrents of our cultural and Spiritual decay flow far deeper than these superficial ripples against the Faith. America is changing, and not for the better.

Today, it seems that we are repulsed by virtue. The evidence is presented on practically every popular television show and movie. Far too often, drama has been reduced to darkly creative new angles on violent sex and/or murder. Comedy and even "reality TV," rarely target a broader demographic than hormone intoxicated adolescents and, of course,  those who will never tire of the same stale jokes and situations regarding sexual promiscuity, both gay and straight. One television show, The Virgin Diaries, in fact mocks chastity and ridicules the commitment of one couple to marry as virgins. Today, sadly, traditional marital commitments are considered counter-cultural and laughable.

Even in sports, our  moral decay is apparent. Take Tim Tebow, for example. He has been called "the most controversial" player in the National Football League. Never mind that numerous other players have committed almost every crime and misdemeanor imaginable. No, it is the polite, Christian missionary -- the one who is not embarrassed to publicly thank God for every victory -- who is ridiculed. The list of so-called "experts" who predicted Tebow's future failure in the NFL is almost endless. Yet, after being benched for the first half of the season, he was finally given a chance and shocked the "experts" by winning six out of seven games for the Denver Broncos. He has made his critics look so bad that, perhaps, even they are now praying for his failure. And, yes, Tim Tebow is also a virgin.

America is descending so far down a dangerous path that a Vatican cardinal recently warned (HERE) that we are "well on the way" to the persecution of Christians. Our senate recently repealed (REPORTED HERE) the U.S. military's ban on not only sodomy but bestiality. In fact, under the radical direction of Kathleen Sebelius, the Department of Health and Human Services has pushed its pro-abortion agenda so far that it is being investigated by the senate for anti-Catholic bias (HERE).

The attacks are coming from all sides. Where justice should be blind, anti-Catholic bigotry (HERE) has even seeped into our legal system. From another branch of government, former Speaker of the House Nancy Pelosi, a self-described "devout Catholic," criticizes "that conscience thing" that she thinks hinders Catholic thinking. Whether from invincible ignorance or intentional lying, Congresswoman Pelosi uses her access to the media to misrepresent Church teachings (HERE) by denying the fact that Church teachings have opposed abortion all the way back to the first century.

Thinking about the mess our politicians have created, I am reminded of the ancient Chinese curse: "May you live in interesting times." Perhaps, an updated American version of that curse might be: "May you get the democracy you deserve."

But the decay is not just in America. Media attention, both here and abroad, too often has attempted (many times, successfully) to tar our many good and holy priests with the evil acts of a tiny minority. In Ireland, for example, a missionary priest was demonized by so-called "journalists" when a woman claimed he had fathered her child (REPORTED HERE). The priest completely denied the charge and even offered to submit to a paternity test. The media, however, rushed head-long into the slander that only later was proven false.

In another traditionally Catholic country, it appears anti-Catholic hatred is escalating into violence. The Mexican  archdiocese recently called for additional security measures after receiving a bomb in the mail (REPORTED HERE). Anarchists are suspected.

My comments, here, are based on just a few of the many headlines that caught my eye over the past few days. I see no reason to believe that the increasing hostility toward Catholicism and Christianity has peaked. Clearly, the assaults on the Faith will continue. The violence that has been perpetrated against Christians and the Church, around the globe, is an indication that the ultimate goal is not just to drive Christianity into the shadows. The ultimate goal is to exterminate the Faith.


"God will punish the world when men have devised
marvelous inventions that will lead them to forgetting God.
They will have horseless carriages, and they will fly like the birds.
But they will laugh at the idea of God, thinking that they are 'very clever.'
There will be signs from heaven, but men, in their pride,
will laugh them off. Men will indulge in voluptuousness,
and lewd fashions will be seen."
Blessed Bembordt
18th Century