+++ A prophet, resting in peace

Standing over the glass-encased tomb of Blessed Anna Maria Taigi, one senses her serenity. With rosary in hand and eyes closed in prayer, a slight smile crosses her lips. Her seemingly peaceful slumber is comfortingly natural, even 175 years after her death.

The life of this Spiritually gifted woman, however, was not so serene.

Anna Maria Masi was born into a devout and loving Siena family in 1769. The Masis struggled financially and, even though Anna Maria worked hard to help support her family, a lack of employment opportunities in Siena forced them to move to Rome.

Eventually, she married Dominico Taigi, who was not wealthy, but from nobility. So, for a while, the newlyweds gladly experienced the pleasures of high society.

Then one day, at confession, she felt the Call of God, asking her to turn from her life of vanities. The experience was profound, leading Anna Maria to begin attending daily Mass and frequent Confessions. She joined the Third Order of Trinitarians and focused on her Spiritual development. Her commitment to prayer brought her closer to her Lord, however, her husband grew tired and irritable from the strains of providing for their family. 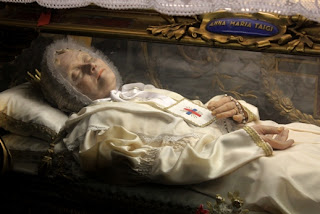 For herself, and the world, Jesus once gave this message:

"There are few, very few my daughter, even among the servants of God, who renounce Spiritual delights in order to embrace suffering by love."

She accepted the challenge, suffering through years of Spiritual aridity, but never losing faith in God or His Church. She also endured physical pain, sometimes sinking down after Communion, as if felled by a disabling stroke. But pain became sweet to her, because it associated her sacrifice with His, expiating the sins of others.

Through the years, she was reputed to read souls with amazing clarity and for discerning the fate of deceased loved ones. She experienced visions, ecstasies and prophecies, including the election of Pope Pius IX and the unification of Germany under "one religion, one German philosophy in one German Fatherland." She healed the sick and warned others of their impending deaths, so that they would die prepared.

Though just a humble mother and laywoman, she gained acclaim both within the Church and without. The poor and the mighty came to her for advice. She eventually counselled popes and kings but would never accept compensation or praise. When a refugee queen once insisted on payment, Anna Maria responded, "Madame, how simple you are! I serve God, and He is richer than you!" 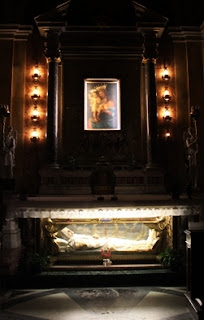 Today, Anna Maria's body rests in the Roman church of San Crisogono, in Trastevere, under the loving gaze of the Madonna and Child. There, we remember that the mystic's serene demeanor, also, is not indicative of her grim prophecies. For 47 years, Anna Maria claimed to receive prophetic warnings for mankind from a ball of light. However, many of these prophecies are yet to be fulfilled because they are clearly descriptive of the climactic End Times. For example, she predicted the Three Days of Darkness:

"A very thick darkness shall envelop the earth during three days. This awful darkness shall be impregnated with such pestilential vapors, and filled with such frightful apparitions, that they will cause, in a more special manner, the death of the hypocritical and avowed enemies of the Holy Church.


"On this terrible occasion so many of these wicked men, enemies of his Church and of their God, shall be killed by this divine scourge, that their corpses round Rome will be as numerous as the fish which a (then) recent inundation of the Tiber had carried into the city. All enemies of the Church, secret as well as known, will perish over the whole earth during the universal darkness, with the exception of some few, whom God will soon after convert. The air shall be infested with demons, who will appear under all sorts of hideous forms.

"During this darkness artificial light will be impossible. Only blessed candles can be lighted and will afford illumination. He who out of curiosity opens his window to look out or leaves his house will fall dead on the spot. During these three days the people should remain in their homes, pray the Rosary and beg God for mercy."

She also prophesied a coming apostasy that will devastate the Church:

"Religious shall be persecuted, priests shall be massacred, the churches shall be closed, but only for a short time; the Holy Father shall be obliged to abandon Rome."

Jesus explained to her:

"First, several earthly scourges will come. They are going to be dreadful, but they will be mitigated and shortened by the prayers and the penances of many holy souls. There will be great wars in which millions of people will perish through iron. But, after these earthly scourges will come the heavenly one, which will be directed solely against the impenitent. This scourge will be far more frightful and terrible; it will be mitigated by nothing, but it will take place and act in its full rigor. However, in what this heavenly scourge will consist, God did not reveal to anyone, not even His most intimate friends."

Our Lord described what must happen before His Church will triumph:

"First five big trees must be cut down in order that the triumph of the Church may come. These five trees are five great heresies." [Can we discern which heresies these are?]

"Two hundred years are hardly sufficient that all of this may happen."

To which, Jesus replied:

"It won't take as long as you think."

He comforted her with the following:

"My child, the Church (My spouse), My Father, and Myself shall remedy everything. For after a punishment ... those who shall survive shall have to conduct themselves well."

At that point, she saw innumerable conversions of heretics, who will return to the bosom of the Church. She saw, also, the exemplary conduct of their lives, as well as that of all other Catholics.

Blessed Anna Maria Taigi died in 1837. Since then, her tomb was inspected repeatedly, proving that even though the other contents of the coffin had deteriorated, her body remained incorrupt. Then, in 1920, her remains were inspected again, finally revealing a condition of decomposition. Wax, today, preserves the face of a servant of God: beautiful, calm and at peace.