After reading a report on how Medjugorje visionary Mirjana Soldo felt sick for three days after a particularly powerful visit with The Virgin Mary in which Our Lady was very sad (article found HERE.), I was reminded of my promise to post more pictures and information regarding weeping Christian statues and images that I have witnessed.


Perhaps the most
famous one is "The Risen Christ," in Medjugorje. For years, the larger-than-life bronze and copper statue has exuded a water-like liquid from its right knee. Pilgrims, there, line up throughout the day and night to wipe prayer cloths on the knee of the statue in recognition of Acts 19:11-12: "God did extraordinary miracles through Paul, so that even handkerchiefs and aprons that had touched him were taken to the sick, and their illnesses were cured and the evil spirits left them." Reportedly, many healings have resulted from the prayerful pilgrims' use of these cloths, back home.


When asked the meaning of this phenomenon, Medjugorje's visionary, Vicka Ivankovic-Mijatovic, reportedly said that it is a sign that we should get on our knees and pray. Investigators have been at a loss to offer a scientific explanation.


Many other statues and pictures exude fragrant oils. The scent is usually very floral though not always the same. Some have suggested that since Blessed Mother is closely associated with the rose, this sensual blessing is a gift from her. Indeed, the strong scent of roses is widely known to fill the room during very prayerful moments.

However, the phenomenon is not limited to statues. Many Christian pictures also ooze liquid at particularly holy sites. For example, in the bedroom of the suffering soul known as "Little Audrey" Santo, numerous statues and pictures wept oil that was determined to be 75% olive oil and 25% from an unknown liquid. 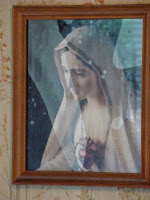 Some critics make the weak argument that when people are raised in a Catholic culture, they are more inclined to imagine miracles. Perhaps they might argue that point for the statue in Civitavecchia Italy, for example. However, there is an abundance of Internet information on many more testimonies of seemingly miraculous manifestations all over the world, in non-Catholic places like in Akita Japan, Rockingham Australia, Kerala India, and many more.  Still, whenever serious claims of apparently miraculous manifestations surface, mocking simpletons are always quick to claim trickery, without the slightest evidence. 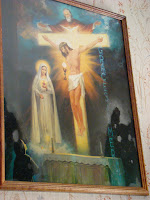 Of course, instances of fraud have occurred, and been exposed, in the past. However, no entity is more zealous in investigating and exposing fraud than the Catholic Church. But the knee-jerk critics choose to remain ignorant of that fact as well as to the details of extensive investigations that find, for many of these extraordinary events, no scientific explanation. However, regardless of the background of the witnesses, these phenomena are not imagined. There is physical evidence that something, at least, is happening in the natural world. 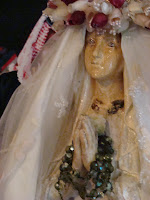 Church officials have been quick to point out, however, that even for investigated and approved sites, the oil that is produced should not be equated with "holy oil" that is used in Catholic sacraments. "Holy oil" has a special significance in Catholic sacraments. Belief in the sacred nature of other oils that are produced at these sites, even when the site is Church approved, is not a dogma of the faith.


Of course, it is always wise to accept the conclusion of a Church investigation but, until such time as that process is complete, careful and prayerful Spiritual discernment is advised.