+ Prophecies: The Three Days of Darkness 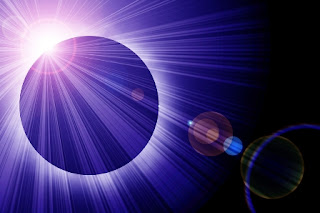 In my earlier posts on the alarming possibilities - not probabilities - regarding an approaching object named Elenin that is orbiting the Sun (see posts here and here.), I pointed out that the reported after-effects of its passing might fulfill the Three Days of Darkness prophecies.

Whether our planet will experience catastrophic consequences on and around September 26, 2011 depends on if the object turns out to be a harmless comet or a looming dwarf star. There are strong opinions on both sides of that debate. Everyone agrees that it will pass directly between our planet and the Sun on September 26. Some investigators have reported that the object is 16 times the size of Earth, with a gravitational force that will cause catastrophic earthquakes and tsunamis. Others argue that the massive size is only when the gaseous coma around an icy comet is taken into account. They say its gravitational force will be minimal. Finally, some report that the object's gaseous tail contains hydrogen cyanide, a toxic combination, that will fan toward our planet, into our atmosphere.

So, the science is in dispute. However, for a little more clarity on the prophecy side of the discussion, I will present a small sampling of the Three Days of Darkness prophecies:

"... the sun will be darkened,
and the moon will not give its light;
the stars will fall from the sky,
and the heavenly bodies will be shaken."
Jesus Christ
Matthew 24:29
"See the day of the Lord is coming
—a cruel day, with wrath and fierce anger—
to make the land desolate
and destroy the sinners within it.
10The stars of heaven and their constellations
will not show their light.
The rising sun will be darkened
and the moon will not give its light.
11I will punish the world for its evil,
the wicked for their sins."
Isaiah 13:9-11
"[After the] great comet, the great nation will be devastated by
earthquakes, storms, and great waves of water, causing much want and plagues.
The ocean will also flood many other countries, so that all coastal cities will live in fear, with many destroyed."
Saint Hildegard
12th Century
"Keep your windows well covered. Do not look out.
Light a blessed candle, which will suffice for many days.
Pray the rosary. Read spiritual books.
Make acts of Spiritual Communion, also acts of love,
which are so pleasing to Us. Pray with outstretched arms,
or prostrate on the ground, in order that many souls may be saved.
Do not go outside the house. Provide yourself with sufficient food.
The powers of nature shall be moved and a rain of fire
shall make people tremble with fear.
Have courage! I am in the midst of you."
Words of Jesus Christ
as reported by Saint Padre Pio
January 28, 1950
"There will be earthquakes and signs in the sun.
Toward the end, darkness will cover the Earth."
The Ecstatic of Tours
19th Century
"The crisis will come on all of a sudden
and the Chastisement will be worldwide."
Marie-Julie Jahenny
19th Century
"During a darkness lasting three days
the people given to evil ways will perish
so that only one-fourth of mankind will survive."
Sister Mary of Jesus Crucified
19th Century
"Satan goes furiously through this disordered world,
and soon will show all his might. But because of my Immaculate Heart,
the triumph of Light will not delay in its triumph over the power of darkness,
and the world, finally, will have tranquility and peace."
Words of the Virgin Mary
as reported by Sister Elena Aiello
1961
"Clouds with lightening rays of fire and a tempest of fire
will pass over the whole Earth and the punishment will be
the most terrible ever known in the history of mankind.
It will last 70 hours. The wicked will be crushed and eliminated.
Many will be lost because they stubbornly remained in their sins.
The hours of darkness are near ... some nations will be purified
while others will disappear entirely."
Words of the Virgin Mary
as reported by Sister Elena Aiello
"The Heavenly Father is preparing to inflict a great Chastisement
on all mankind. With my Son, I have intervened so many times
to appease the wrath of the Father... Prayer, penance and courageous
sacrifices can soften the Father's anger."
Words of the Virgin Mary as reported by
Sister Agnes Katsuko Sasagawa
Akita, Japan
1973
"The time of darkness nears ...
I understand that sin exists and that there will always be those who choose the enemy. What I am trying to convey to you is that your world has begun
to co-exist with sin in such a way that few object anymore.
You are asleep, children of the world! ...
Praise God with me, souls of Earth, even as He prepares to renew your world...
[W]e are entering the storm, but not without Jesus, our rudder."
Words of the Virgin Mary as reported by
an Irish visionary called Anne, published by permission of her Bishop
July 5, 2004