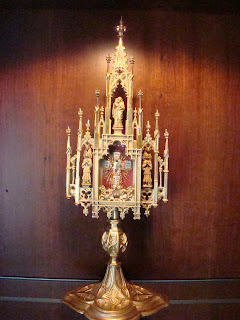 A few weeks ago, I was entrusted with a reliquary that ostensibly contains a splinter from the True Cross. An aging priest had found it, years ago, in the attic of the home where he and a number of priests had been living. He asked me to try to make it available to Catholic churches for viewing during Holy Week, each year. This year it will be on display at a church in Florida.
As you can see, below, the reliquary is highly ornamented with golden accents, pearls and Latin inscriptions. I do not believe the reliquary itself is extremely old because I have seen it, or at least something similar, advertised in a recent catalog. The relic, itself, is the small splinter at the center of the ornamented cross. It is secured with a strand of red thread. 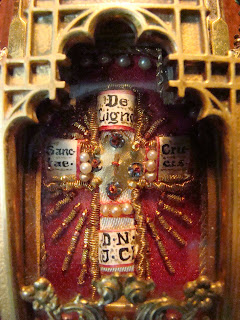 When the relic is opened, one can see at the back that the inner casing is protected from intrusion by a wax seal. On the seal, there is a coat of arms, something that looks like hanging balls or a scale, and a band of writing, perhaps, around the outer stamp. Particularly because of the distinctive seal, I hope someone might be able to offer guidance on determining the provenance of this reliquary and its possibly precious contents. 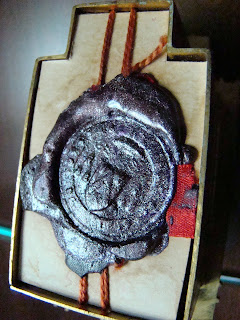 Though I am not aware of any miraculous manifestations that are associated with this relic, I felt that it would be a legitimate addition to this blog. For more information on the history of the True Cross and the controversies that accompanied it through the centuries, see Michael J. Craughwell's informative article at:
http://www.ncregister.com/daily-news/taking-the-measure-of-relics-of-the-true-cross/