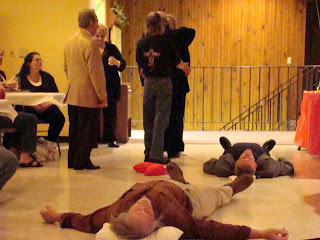 
Still, I urge extreme caution before believing just anyone who demonstrates these gifts, especially if fame and/or fortune are involved. Remember, “Satan himself masquerades as an angel of light.” 2 Corinthians 11:14.

Here is a general description: Before resting in the Spirit, basically, Christian prayers are offered up during what is often called a “healing prayer service.” Then, a Spiritually Gifted person either receives the congregation, one at a time, or picks them out, individually. The procedure usually requires laying hands on the individual and, sometimes, a Word of Knowledge is whispered into that person’s ear.
I have witnessed a number of “prayer warriors” conduct these services but, for me, the most effective has been an elderly Catholic evangelist named Ruth Werkowski. Ruth and her husband, Fabian,  have travelled the east coast for over 30 years, spreading the Gospel of Jesus Christ with her Spiritual Gifts. I have been blessed to accompany them on some of their travels, serving as their driver and Ruth’s “catcher.” So, as catcher, I have had the opportunity to witness, up close and personal, thousands of responses to her Gifts from God.
Ruth prefers to individually pick out each participant from the audience, as she is led by the Spirit. She almost always imparts a Word of Knowledge into the ear of each person while she prays over them, as they individually stand before her. Some of these Words are generally encouraging, but I have been surprised that many people later told me Ruth said something important that she could not possibly have known on her own. 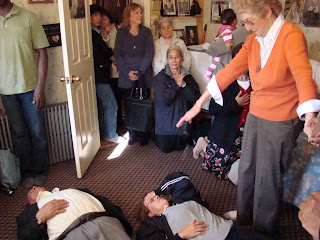 With Ruth, at least 90% of her participants fall in the Spirit, leaving me to catch them and gently lower them to the ground. Yes, I understand the complaint of critics, that many of these people are inclined to accept what is happening and voluntarily fall even when nothing Spiritual is actually happening. In some instances, I suspect that claim is true. But that skepticism does not explain the many physical, psychological and Spiritual healings I have seen. I will be writing about these instances in future blog posts but for now I will just say that, truly, I have witnessed the deaf hear, the lame healed, and the demonically oppressed delivered. I have witnessed miraculous golden particles, of some kind, appear at many of these events. I have been told numerous stories, after our services, about finally being released from pain or depression.
Ruth says that she is only a conduit and that our Triune God is the Great Physician, the Great Healer. She insists that all praise belongs to Him.
Each participant’s response is very individualized. In a matter of moments, some people weep so profoundly that it would take a psychiatrist years of psychoanalysis to produce such a cathartic release. I have seen people so overwhelmed by the Gift of Laughter that, if I had not known these people, I would have suspected show-boating fakery. Some people stiffen, flat as a board before falling, while others become totally limp. Some heave sighs of relief while others have such a peaceful smile that they look decades younger. A few simply remain standing, while praying in the Spirit.
An important test of these prayer services is to determine whether holy “fruit” have been produced. From both Catholics and Protestants, I have heard countless stories about how profoundly resting in the Spirit with Ruth has improved their relationship with Jesus Christ.
[For more information on Ruth's Gifts and Spiritual Messages, order her book "Transformed by Trouble: From Misfortune to Miracles" or visit  http://www.verohousepublishing.com/.]