++ The miracle of weeping statues

I have been blessed to visit, on a couple of occasions, a very modest but amazing home in New York state. I have personally witnessed the spiritual manifestations I will describe but, out of respect for the privacy of the deeply spiritual homeowners, I will not use their names or address.
My strong Christian friends, Ruth and Fabian Werkowski, arranged for my invitations. They had previously experienced miraculous events at this home and graciously wanted to share the experience with me. In fact, there are so many stories to tell here that I will only be able to touch on a few in this blog posting. 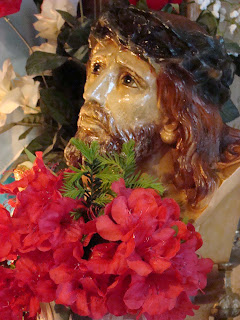 Both of my visits were similar. We said the rosary on the drive over and then a mass was said in the small, packed living room of the house. The standing-room-only crowd became so dense that people flowed out the front door and onto the front deck. We had to open the windows for the people on the deck to hear the mass.
In fact, my first mass there was the most moving one I have ever attended. I don't usually like to admit something like this, but the overwhelming spiritual experience made me cry. Perhaps this was the reason why: In that small room, standing next to the altar, I was surrounded by a wide variety of Catholic statues and pictures... and all of them were weeping. The tears consisted of a fragrant holy oil. They flowed down the statues and were collected in silver platters below them. One statue of the Blessed Mother exuded the most oil and a large cotton ball was placed above her folded hands to soak up the tears. Even the wall pictures of Jesus, saints and angels were all wet under the glass from the oil. 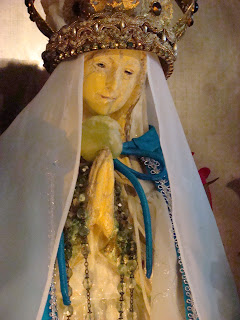 The story was told to me (and if I am incorrect on this in any detail, I will correct the record) about the first time the tears were witnessed. The homeowners had used this room for prayers. In it, they put many Christian statues and pictures. One night - I believe they were actually asleep - they woke up to the smell of fragrant roses, a surprsingly common sign of the presence of the Virgin Mary. They went downstairs and witnessed that the statues and pictures were exuding the fragrant oil.
They were deeply moved but wanted to be careful. So, they invited a priest to come over to determine if it was a holy manifestation or, perhaps, even demonic. The priest entered their home with a crucifix and, to the surprise of everyone, Jesus on the cross started to weep. The conclusion was that this, indeed, was a holy phenomenon. Since then, this home has born many fruit, bringing souls closer to Christ and has been visited by numerous priests and Christians on select days. I have been told that even the Vatican has sent investigators but I do not know of any conclusions, yet. 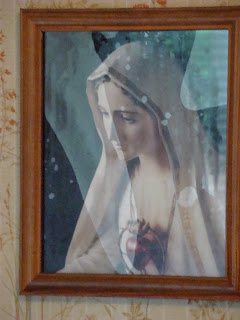 At the end of each visit, some of us were given cotton balls soaked in the oil or were allowed to dip our rosaries into it. Following St. Paul's advice to "Test everything but cling to that which is good," I have thought about whether there could be any subterfuge. Perhaps, I thought, oil could be sprayed on before we arrived. But based on what I have seen and the Christian devotion of the people I met, I cannot find any detail that even hinted at deception. In fact, I was particularly struck by one comment made on the way home after my second visit. One of our friends mentioned that when she first arrived, the statues were only mildly exuding oil. It wasn't until the mass commenced that the tears started flowing heavily.
All photographs:
Copyright 2008 Kenneth E. Nowell,
All rights reserved.