I am preparing for my second trip to see El Cristo Peregrino – the Pilgrim Crucifix – in a few days.
The first time I saw it, I had travelled to the Tampa area where my good Christian brother, Jean, lives. That evening, in the large screened patio of his home, we had a very intense and emotional prayer service. 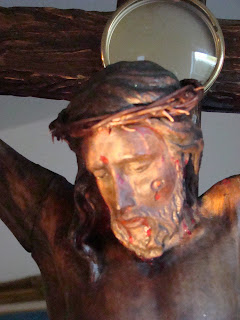 An altar had been set up with flowers, candles and the carved Pilgrim Crucifix, which stands perhaps 42” tall. As the sun set, our little congregation of about 60 people prayed the Rosary, the Divine Mercy Chaplet, the Stations of the Cross and many other prayers. Most of us were humbly anxious to learn whether we would be blessed with the miraculous manifestations that we had heard often accompanied this Cross. So, for perhaps and hour and a half we continued our fervent prayers as we waited for the arrival of the two custodians of the Crucifix, Myriam and Idelcy.  They had insisted on attending mass at a Catholic Church that night since plans fell through at the last minute for mass to be offered at our prayer service.
Soon after they arrived, Myriam told us, in Spanish, the history of the Pilgrim Crucifix while Idelcy translated. The Cross, they said, belongs to Mileny Peña of Bogota Colombia. She was a non-believer until her 20th birthday when she started receiving apparitions of the Blessed Mother. So, she converted and became Christian. Some time later, she adopted a teenage girl who had become entangled with prostitution and drugs. Mileny put the girl on a Christian path. One day, the two of them saw this Crucifix in a shop. Mileny was deeply moved by Christ’s passion on the Cross so the daughter secretly arranged to make small payments on it until it was paid in full. Then she gave the inspiring gift to Mileny for Mother’s Day.

Soon after, the Crucifix offered her miraculous displays. The wooden representation of Christ began to ooze oil and sweat a bloody looking liquid through the wounds. According to Mileny, she asked Blessed Mother why this was happening and she replied that it was to give faith to the non-believers and to strengthen the faith of believers. Blessed Mother said that we are not allowed to touch the image on the Cross because these manifestations are so immensely Divine that we sinners on earth will stop the manifestations if we touch it. 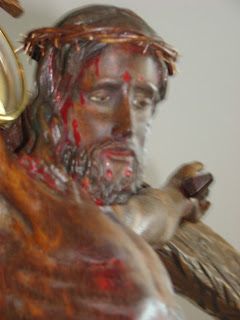 Blessed Mother has asked that the Cross stay in the United States in order to bless, heal and convert sinners. It is with us to help the sick, to protect us from disasters, and to renew the call of priests, nuns and seminarians to their ministries.
Later, I learned from Myriam and Idelcy of the unusual lives they have been called to lead in submission to Blessed Mother’s requests. For example, in order to show proper respect for Jesus Christ, she asked that the Crucifix be transported to America, not like luggage or a package, but like a loving mother would transport her child: in her arms. Idelcy told us amusing stories about the unusual reactions they have received in airports and on planes. On board, they have often harnessed the Crucifix in its seat, like a passenger. But, one time, when no extra seats were available, they worried that the Cross would have to be stored on the floor under their seats until, finally, a flight attendant offered the solution. The Crucifix made the trip, strapped into the co-pilot’s seat!
That prayerful evening in Tampa, I witnessed what seemed to be red paint becoming wet on the Crucifix and I saw perhaps as many as 20 emerald-like sparkles develop on the statue. Fabian Werkowski, a very holy friend, was uncontrollably moved to tears as he described seeing much more than I witnessed. 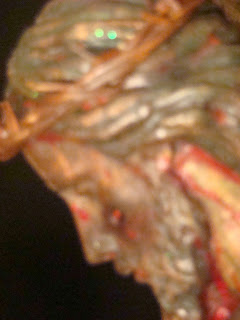 Regardless of what we saw, I believe Blessed Mother accomplished her mission: to bring us all closer to her Son, Jesus Christ.
Though they have no financial means of their own, and they make no overt requests for money, still donations have allowed Myriam and Idelcy to take the Cross to many states in America and even to many countries. In fact, they rarely know where they will be in a few days time because they simply take the Crucifix wherever they feel called.
There are many more stories to tell about the Pilgrim Crucifix - and my pictures do not adequately convey the appearance of oil, bloody liquid or emerald-like glitter - but I will wait to say and show more after my next visit to the foot of the Cross.
All photographs:
Copyright 2010 Kenneth E. Nowell,
All rights reserved.
﻿